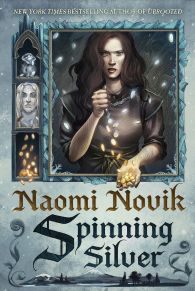 Miryem is the daughter and granddaughter of moneylenders… but her father isn’t a very good one. Free to lend and reluctant to collect, he has loaned out most of his wife’s dowry and left the family on the edge of poverty–until Miryem steps in. Hardening her heart against her fellow villagers’ pleas, she sets out to collect what is owed–and finds herself more than up to the task. When her grandfather loans her a pouch of silver pennies, she brings it back full of gold.

But having the reputation of being able to change silver to gold can be more trouble than it’s worth–especially when her fate becomes tangled with the cold creatures that haunt the wood, and whose king has learned of her reputation and wants to exploit it for reasons Miryem cannot understand.

You know how sometimes you read a book and you just know that it is in your English Professor AU self’s syllabus? This is one of those. It was enjoyable but it also made all my university muscles work–and that’s a good thing. Sometimes I feel like my brain is doing no work when I’m reading a book, but Spinning Silver definitely put my brain to work. Uprooted was much the same way–I could go on and on and on about magic and words and names and the importance of all those things and I could write a very good comparative essay on these two books.

I almost want to, that’s how much I enjoyed this.

Spinning Silver is told in multiple perspectives, each with a very distinct voice and point of view. Seeing the same events from multiple perspectives was amazing–especially the little things, like what one character takes for granted and another pays special attention to. It was just. Really good.

I honestly don’t know what else to say. It was gorgeously written and feminist as hell. Women were at the forefront of everything here, whether they were doing traditionally “feminine” things or not–and they were all strong in their own ways.

Just…go read it. This review was absurdly short, I know but it’s really hard to find things to say about this that aren’t going to be repeating “amazing” and “gorgeous” over and over again.

Have you read this?
Do you have any books on your English professor AU self’s syllabus?

Had an amazing time celebrating the wedding of two of my favourite people last night! I’m honoured to have been there—I can’t think of two more perfect for each other. . Points to your Hogwarts house if you recognize the song in the last slide that the whole Sacred Heart Anime Club (2006) went nuts for. . . . #wedding #ashlyandalex #ashlyandalexwedding #ashlyandalex200111 #theresnoofficialhashtag #maybethekpopmethodworks
I was going to post a Top Nine, but honestly it was boring and I’m barely a book account anymore so here are some of my favourite 2019 highlights. This year had some serious highs and lows, but the highs are the only thing I want to bring into the new decade. We released season one of @thisispubhub podcast, got started on season two of said podcast, I got way into k-pop and then took an 8hr road trip to see BTS, had a very stressful but busy summer, finally got a job doing what I actually want to do, my sister moved out and a childhood friend became a roommate, and now I am ending the decade hanging out with my parents and their new puppy. Not a bad way to end it, I’d say. Happy New Year, everyone! Let’s hope 2020 is kind to us all. #happynewyear #2020 #newyear #2019
Another trip with this book, but I’ve actually started it this time 🥳 . How have everyone’s holidays been? Mine have mostly been about playing with the puppy and hanging with my parents (and also bingeing Schitt’s Creek). . . #bookstagram #book #books #allthebooks #redwhiteandroyalblue #caseymcquiston #romancenovel